Stephen Convey and the Attraction of Place

My article on the Australian self-taught artist Stephen Convey was just published in French as 'Stephen Convey et l'attraction di lieu' in Création Franche, no.52, July 2020 - available at www.musee-creationfranche.com/
Stephen Convey's work will also be included in the annual invited exhibition, Visions et Créations Dissidentes at the Musée de la Création Franche, Bègles, France, 26 September 2020 - 10 January 2021
I publish a version of my article in English here for anglophone readers, including additional illustrations of the artist's work 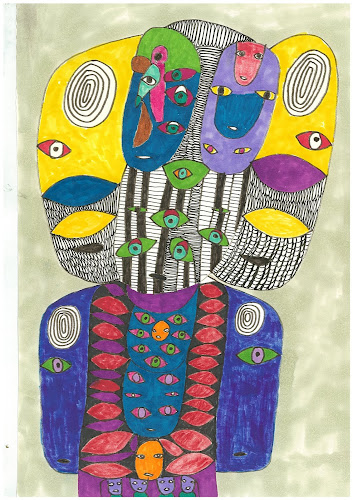 Internal Dialogue, ballpoint pen and marker
The Australian artist Stephen Convey started making work in the mid-1970s. At that time, he was a wharf clerk on the Melbourne waterfront, a job that meant he spent a lot of time in dreary offices waiting for ships to arrive. As with some others before him, such as Scottie Wilson, he began drawing absent-mindedly in times of boredom. He soon realised that the act of drawing took him to another place. As he says, “I seemed to be able forget about time and become immersed in the moment.  I became fascinated by the images that seemed to flow out and it made the humdrum existence of work a lot easier to bear.” (Unless otherwise stated, all quotations are from communications with the author in spring 2020.) The urge to draw was not backed up by an artistic education. “I grew up without knowing art,” (Beier 17) he notes. However, although he never visited art galleries, there were books at home filled with images and his parents took him to museums sometimes. Most of the friends and work colleagues he has interacted with over the years have not been particularly interested in art. Entirely self-taught, his work has remained spontaneous and intuitive to this day. “I have no preconceived themes. Ninety-nine per cent of the time I just start,” he says (Beier 17). There are, though, recurring elements. The human figure, and in particular the face, is usually central, although sometimes stylised to the point of abstraction, and body parts, especially eyes, often crowd the picture space, commonly creating an effect of horror vacui. His oeuvre is also populated with strange, hybrid creatures; the spiritual forms of more mundane animals, perhaps. And there is a strong connection to place and the landscapes that he has known and inhabited, rendered symbolically and empathetically, rather than pictorially. In view of this, it comes as no surprise when he says, “The drivers for my work are that my art is an important extension of my self and my connection with the world.” 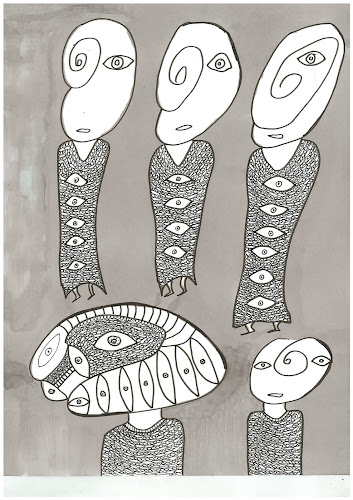 Convey was born in 1950 in the inner Melbourne suburb of Prahran. Now a rather trendy part of the city, during his childhood it was much more down to earth and significantly less developed. The young Stephen and his brother Tony, who is also an artist, regarded it as “a magical place,” filled with odd characters and interesting buildings, including derelict houses, from which the two of them collected old newspaper advertisements for movies that they found under the linoleum covered floors. The cinema was part of the magic, and equally the nearby Yarra River, which runs through Melbourne to the sea. As a young teenager, Stephen says he spent most of his time exploring Gardiners Creek, a tributary of the Yarra in nearby Glen Iris, where the family had relocated, “being fascinated by the natural world of frogs, eels, tortoises, and small native fauna.” He even remained close to the Yarra throughout most of his working life on the docks. 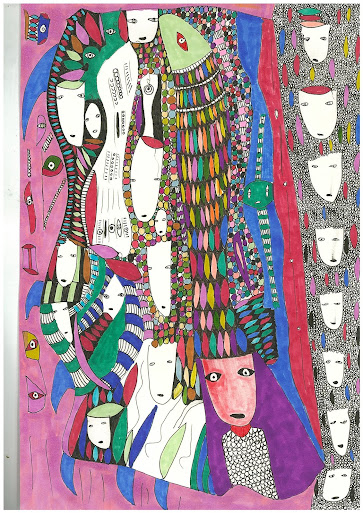 The Maze, ballpoint pen and marker

School was, for Convey, a largely unwelcome period of resisting attempts to force a conformism to which neither he nor his brother were suited: “The rigid discipline and dogmatic teaching didn’t appeal to me and by my teenage years girls and rock ‘n’ roll had taken a firm hold.” (Warner 37) He left school as soon as he was able and began a string of mostly labouring jobs. Before he settled into working on the docks, he hitchhiked to Sydney after reading Kerouac and the Beat writers, where he lived in Kings Cross, which at that time was notorious as the city’s clubland, gangland and home to society’s outcasts and dropouts. Back in Melbourne, working first in the railway yards, he was surrounded by an eclectic mix of people, including, “itinerants, musicians, junkies, alcoholics, writers, uni graduates and other assorted eccentrics,” (Warner 38) making for an enriching and often enjoyable experience. Music was, and remains, a hugely powerful, life-affirming experience, that both mirrors and finds expressive equivalences in his art. Over the years he has amassed an extensive and enviable record collection: “Music has always been a big influence on me: the rock ‘n’ roll of Little Richard, Buddy Holly, Jerry Lee Lewis and also the lonesome sounds of Hank Williams and Lefty Frizzel had a strong emotional effect. I have always been a seeker and started tracking down all influences on those people and many more. I realised this is a never-ending quest and one that I am still pursuing.” 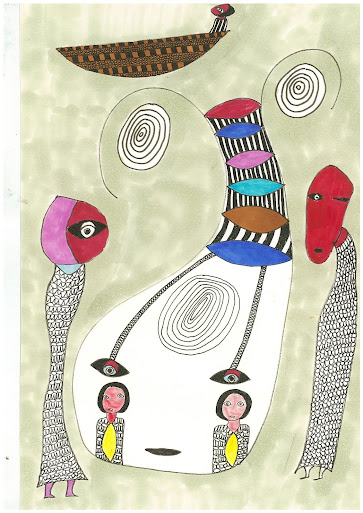 Journey, acrylic, ballpoint pen and marker
While he rejects blind social conformity, Convey has strong personal ethics: “Images dredged from my inner world are my way of attacking the blandness of civilisation. McDonalds and Coca Cola are destroying individual cultures, turning us all into homogenised sameness. My journeys into my inner sea are my grasping for life and searching for deeper reality.” (Convey, S 3) Family has also played an important part in his life. He tells us, “I tried to instil in our children a love of nature and the mystery that life is. I used to take them on walks through parks and laneways and tell them it was the secret way.” Affinity with the natural world is strong. It is where, he says, “I feel most comfortable.” His brother remarks on Stephen’s strong attachment to Gardiners Creek and suggests that he “intuitively empathised with the original inhabitants whose stone tools lay buried under the grass.” (Convey, T 15) The attention he pays to place is always, therefore, fully sensory and intuitively immersive: “Country, as in nature, has a big impact on my art. I am always picking up different sorts of rocks, feathers, pieces of wood and seeds, and being amazed at the patterns. I suppose a lot of the symbols come from my belief that everything is connected.” 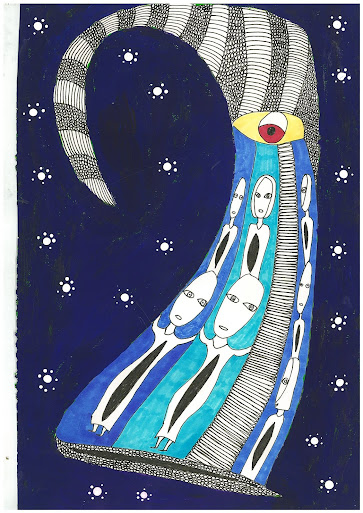 Flowing, acrylic, ballpoint pen and marker
In fact, Convey’s embrace of art making proper can be related to a kind of epiphany involving experiencing a powerful pantheistic intuition of nature as integral in a living, organic universe. As is often the case, this occurred at a difficult time in his life: “Work was really getting me down: I had nothing in common with the people I worked with. They were mainly relics from the ‘50s Cold War mentality and I was full of optimism and change. It was becoming harder and harder to keep going. I was continuing with the meditation and walking and starting to have weird experiences such as seeing ghosts and all sorts of spirit-like entities. Things were getting out of hand.” (Warner 38, 40) After one particularly powerful experience he relates, in which “magpies and wattle birds were talking to me” and  “the trees and plants were also communicating their inner thoughts to me,” Stephen found himself incarcerated for a couple of months in a “locked, overcrowded ward full of men and women swarming around praying, screaming, crying” in Melbourne’s old Larundel Psychiatric Hospital. After his release and return to work, he found himself drawing continually. “It seemed,” he says, “as if I had reached a place deep within myself that would stay with me forever, the primeval source if you like.” (Warner 40) 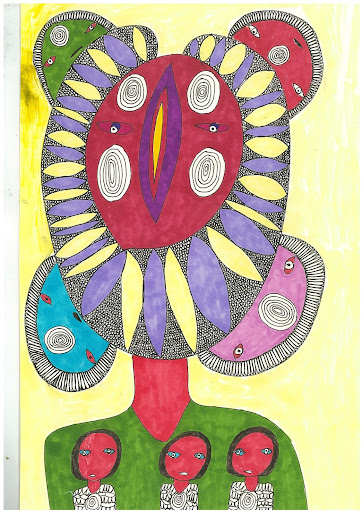 Heart of the Matter, ballpoint pen and marker
His methods rely on allowing images to rise to the surface from unconscious depths, as it were: “They just come out and flow out with my pen, marker or brush. I suppose it is similar to automatic writing, as it is completely spontaneous.” Precisely because of this Convey tends to use whatever materials are immediately available, although this does not always produce fully satisfactory results for him, as was the case with the very first works he made. Similarly, at times he has made drawings using fugitive materials that severely limit their lifespan. The first works he was fully satisfied with were made with Japanese Marvy makers that his wife, Suzie had suggested he use early on. Given the choice, he says, “I like to draw with Mitsubishi Uni-Ball biros and markers – whichever I can find. When I paint, I use acrylics, and use the brushes and their ends to sometimes draw with on the board or canvas.” The urge to make art is powerful: “I always take drawing books, biros, etc wherever I go,” he says, “I like to produce or start something every day. Otherwise I don't feel comfortable.” 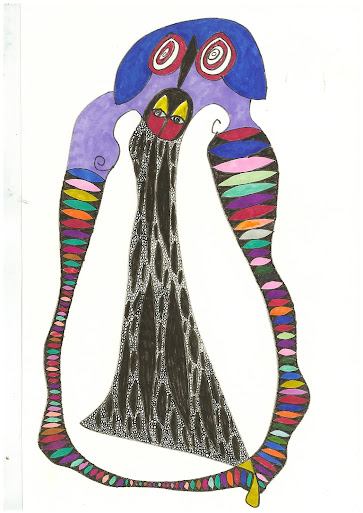 The Talisman, ballpoint pen and marker
There are a number of recurring motifs in Convey’s work. Many images are dominated by a schematic human bust or face with figures contained within the overall form. Figures are also sometimes ranged across the shoulders of the main form. Vulvic shapes are also common elements, often serving as noses. The human form, whether complete or as constituent parts dominates his iconography. It is always, however, cast as a mythic presence in direct contact, and co-extensive, with the fecund forces of the universe, as is clear in Tuning In (below), which is redolent of some shamanic vision. Convey’s work abounds with references to energy and flow; there is a sense of things in motion and in the process of (presumably endless) transformation, mutation, development and diminution. Spirals are common elements, often in the form of ancient mythic snakes, and jagged triangles produce a feeling of almost iridescent energy, set against stars that are like synapse pulses revealing an organic universe of spectral presences. 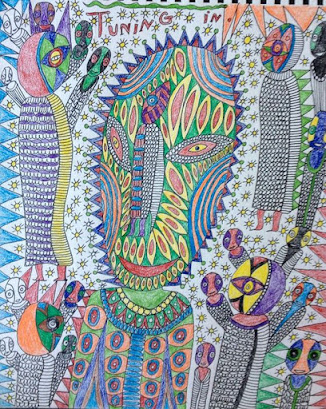 Tuning In, ballpoint pen and marker
Although he has exhibited his work occasionally since 1988, Convey has never, as Beier put it, “sought exposure to his art, which puzzled or even irritated his friends. Art was to him a way to personal freedom.” (Beier 12) In other words, for Convey the emphasis is on the process of art making, rather than its dissemination. His art is also about understanding the self through the images that emerge. “It is important that I create images wherever I go,” he explains, “It helps me make sense of my existence.” Yet, he also regards his art as a communicating vessel: “A lot of the time I find it hard to communicate with people,” he told Beier, “So many things can’t be conveyed in words. There is so much inside anybody’s mind, there aren’t enough words in the language to say what we really feel. But in a drawing, I can put it all down precisely.” (Beier 18) Convey’s engagement with nature was thrown into relief around eight years ago when he had a liver transplant: “I was days away from dying when I was lucky enough to receive the gift of life,” he says, “Being so close to death has given me a better appreciation of the world around us and life in general.” And since then his artistic energies and production have not dimmed, but further intensified. 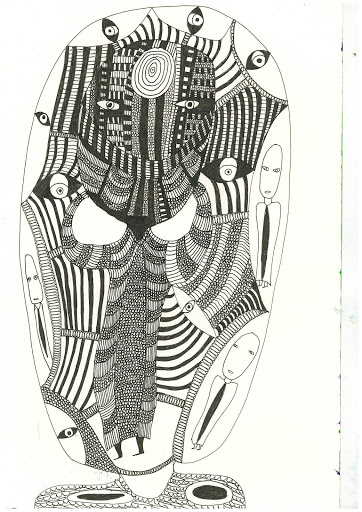 Tremendous and imaginative drawings that come from a enlightened mind..Bravo.

A wonderful selection of Stephen's work. The sinuous shapes and colours of 'The Talisman' and 'Flowing' have an extraordinary quality of movement.