An Artist in Touch with the Unconscious

I reproduce an English version here for anglophone readers. 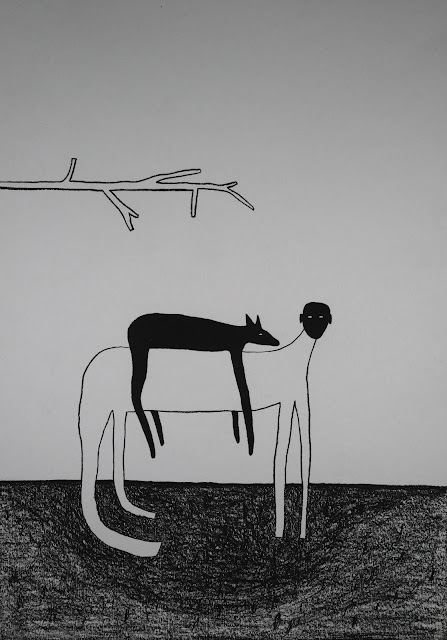 Alan Doyle's recent black and white drawings seem to emanate from a primal realm. His figures and creatures are autochthons revealed for twenty-first century eyes. They are very much of the earth. They belong absolutely to the landscapes they occupy and from which they seemingly arise. The artist achieves all this with a striking economy of means – sometimes even pictorial clues to the places his figures inhabit are absent, and yet the viewer is led to believe, somehow, in their existence in an activated space that forever hovers at the ill-defined boundary between the mundane visual world and unformed realm of eternal form-making. 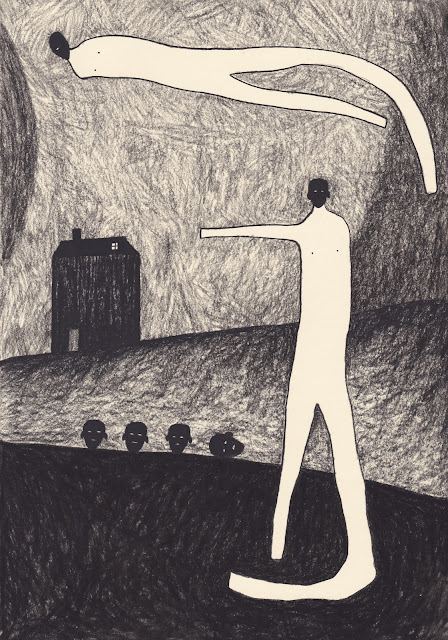 Each drawing characteristically contains only a limited number of participants, ranging from human and animal figures to hybrid creatures, that only intensify the sense of an ancient psychic elsewhere.

Doyle was born in 1984 in County Meath, Ireland, an area well known for its prehistoric monuments. The third of four children, he grew up mostly in County Wicklow, south of Dublin, which he still calls home today. His schooling was disrupted at times because of ill-health, and he was unable to fully participate in the kinds of physical play in which most children engage. These solitary periods actually fed his early discovery of drawing and making things. Time spent in artistic pursuits gave form and structure to the passing hours and enabled him to engage in acts of constant creation and recreation of imaginative worlds that reflected his developing personal vision.

Although he applied to study art, his disrupted schooling had left him without the qualifications deemed necessary for his preferred course. He enrolled on another, but soon dropped out when he realised it would not deliver the things he wanted from artmaking. Disheartened by it all, for a few years he concentrated instead on a regular job. But the call to make art and music was irresistible. He gave up the security of paid employment and from that time on devoted himself full time to the creative vocation. 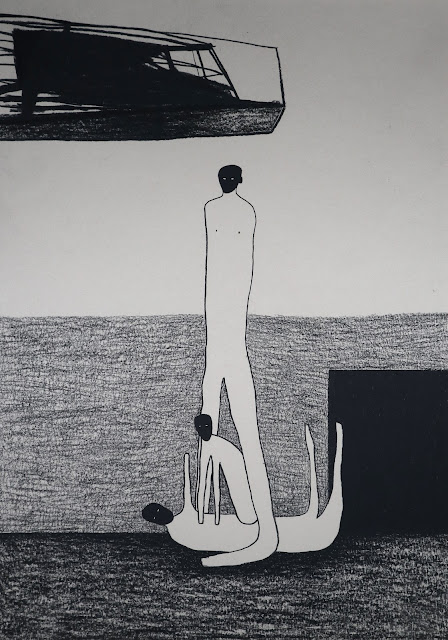 Doyle says of his artistic journey, “I used to paint a lot when I was teenager and up until my early twenties.” At around the age of twenty-five or twenty-six he moved into a flat with his then partner. It was very small, so he didn’t have space to paint. Instead, he says:

I made small collages and I started drawing with pen and ink. The drawings took hold, and I would work on them all the time. They were mostly done with fine line pens with obsessive detail. These were the first things I showed. I organised a little exhibition in the basement of a metal record store in Dublin, where myself and some friends played some noise music to accompany the show. I sold a few works, which was great.

Subsequently, he experimented with wax crayons and ink wash, occasionally returning to painting. More recently, he has been using charcoal. 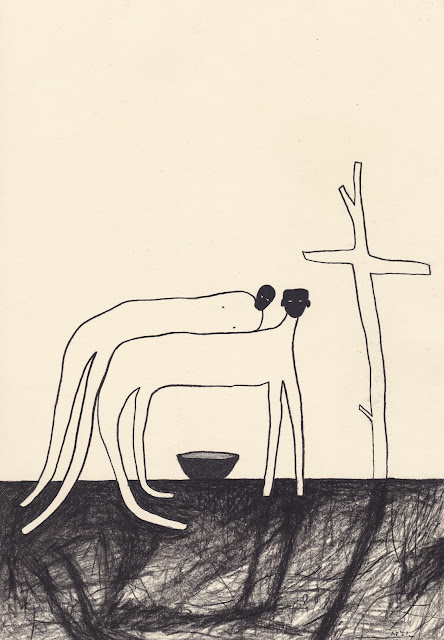 “I like the feel of charcoal,” he explains, “I like charcoal sticks, but I mainly use charcoal pencils and I go through them pretty quickly.” Besides enjoying the feel of the charcoal medium, Doyle’s decision to stop making pen and ink work was also partly due to problems he has been experiencing with his dominant left arm, which, he says, “gets painful when I draw or paint and has stopped me playing guitar almost completely.” 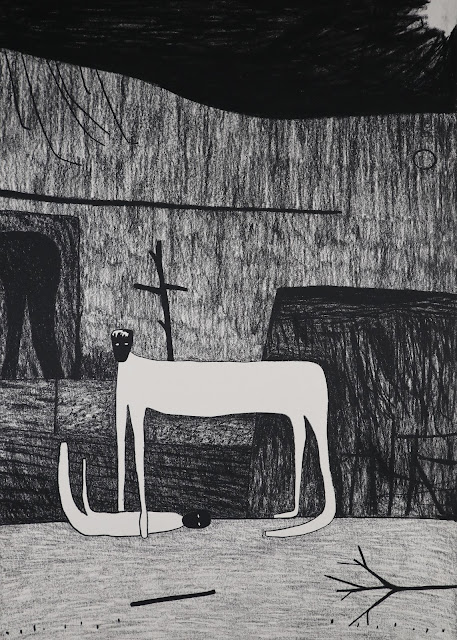 Doyle’s subjects are enigmatic, arising as they do directly from his unconscious. He tends to be surprised by the way they reveal themselves to him through the process of making. But then, as he says, “I never have a defined or finished idea of what I want to see; more a vague feeling.” Thinking about the constant revisions evident in charcoal drawings by artists such as Matisse and their apparent absence in his own work, I asked Doyle whether he makes a lot of changes in a drawing, or whether the image tends to flow out onto the paper first time. With characteristic pragmatism he answered, “I usually start and just try to keep going until the piece is finished. If I don’t like the first few lines I put down, I usually discard it and move onto another one. I try to do at least one drawing a day. Sometimes I might do a few, and something or nothing comes out. I’m always trying.” 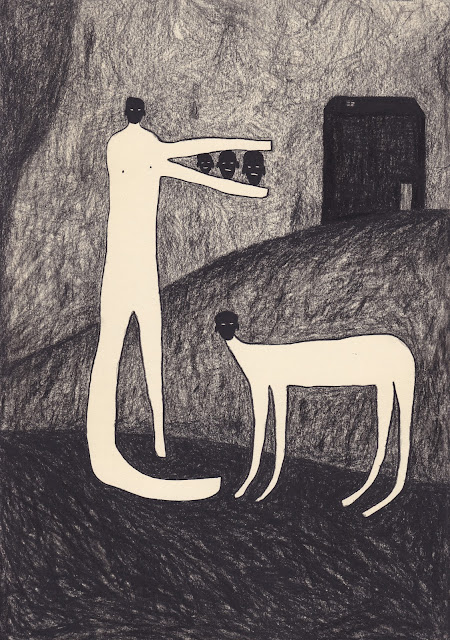 The mystery in Doyle’s drawings is reinforced by his reluctance to give them titles. This is not a result of any desire on his part to obfuscate, but rather to allow individual viewers scope to interrogate and interpret images in the ways in which they might speak as directly to them as they do him. “I’ve always been apprehensive about leading the viewer too much,” he tells us, “I like to leave room for interpretation and for people to bring their own ideas to the work.” There is, to be sure, a certain organicist belief here in the communicative power of his drawings: “I love words and poetry,” he says, “And I read and write. But I like the images to speak for themselves.” 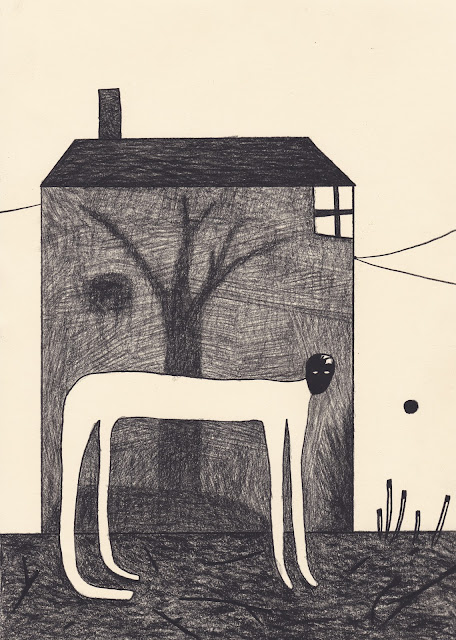 The drawings contain a number of recurring motifs, which have the aura of arcane symbols. These include: an elongated human figure with tiny black head and one leg extended in a long curve; black dogs and doglike human hybrids, again with small black heads; and wooden branches and wands that as often as not seem to pierce, or protrude from, characters in the drawings. Sometimes a house appears; schematic, dark and imposing. Characteristically there is a door, a chimney, and a single small window, either at the top of the facade or in the pitched roof. The overwhelming feeling for this viewer is that the house contains a single occupant, sequestered in the crepuscular dreamscape. Characters appear fluid, caught in the process of metamorphosis, and often seeping easily in and out of each other. In one drawing a viscous black shape pours out of the torso of a human figure, metamorphosing into a black dog as it streams into the picture space. In another, a doglike hybrid protrudes literally through the back and belly of a human figure. Yet the atmosphere of the drawing is utterly still and placid. Four tiny white eyes stare unblinking out at the viewer, as if these are wild animals, startled and suddenly motionless, trying to discern whether they have been discovered. 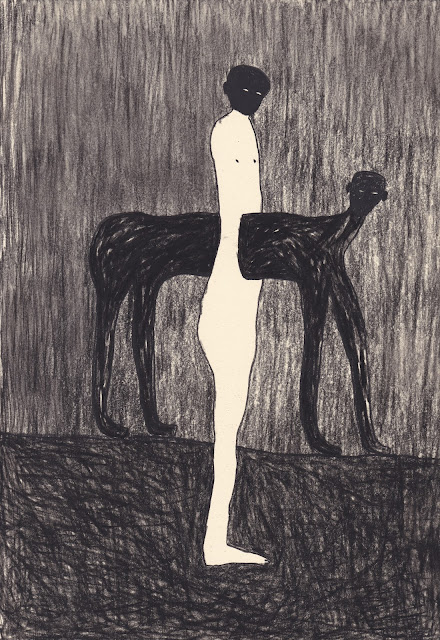 Doyle explains that he is trying to achieve a certain universality in his motifs: “I want the figures in the work to be symbols of all people, all genders and races. I want the places to be all places and no place at the same time.” Of the interchangeability of human and animal he says, “I think the animal is the human and vice versa. The marks that you make when you’re drawing or painting are vehicles to get you into an image, into a space, on the page or in your head. At the moment these human animals are guides.” He continues: “Some figures are armless or have objects or figures coming out of them or going into them. I see it as them being affected by place, surroundings, or other people. Maybe it’s just certain feelings I have about being in the world.” He explains characteristic tonal contrasts as being formal decisions led by his medium: “Whether the figure is white, and the animal is black, or vice versa, makes no difference. This is just because of the materials I’m using and the way the drawing is made. I don’t see these things as being good or bad, everyone is a little damaged, and we carry it around with us. It shapes the way we see or are seen by others. The human/animal in art has always been there. One seeps out of the other, around and around.” 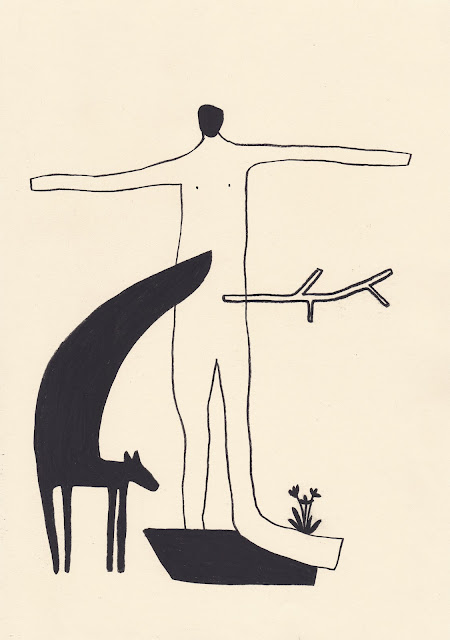 Many of the drawings are quite stark, with little or no clue to any specific setting. Although in every case there is a sense of the physicality and near-tangibility of the very air surrounding them. In pieces that are worked on across the whole sheet, including shading, the atmosphere is similarly dense, and the pictorial space quite claustrophobic. As a result, the images often conjure up a feeling of being strangely simultaneously indoors and outdoors. When I suggest this to the artist, he replies, “Is the imagination inside or outside. When we look at an image, the image enters us: through the eyes, inside the head.” When viewed en masse Alan Doyle’s recent drawings suggest a strong sense that we are witness to some unfolding narrative. They are distinctly mythic in nature and construction. Though visual, rather than verbal, like all mythological cycles they assume life and relevance through being told, as it were, and their order is infinitely interchangeable. Here there is a saga, and stories, to be sure. But there is neither beginning nor end.

Note. All drawings are untitled, charcoal on paper. All quotations by the artist are from a conversation with the author on 6 October 2021

Composed the following before reading your article ... After simply viewing and contemplating these images of Alan Doyle's art:

Thank you for posting this incredibly interesting article. Very appreciative of your introducing me to this fascinating artist.

Love the images ... so filled with a lush, rich, yet stark and powerful presence.

There's a mystique and mystery to these immaginative works, which also possess a sense of humor and project a strong sense of place.