Artist and Spiritualist Madge Gill is an important figure in twentieth-century British art. Her work deserves to be much better known.


I spent the morning with Madge Gill. I finally read Vivienne Roberts’ excellent article to which Light devoted the whole of its June edition, and had a really good look at Madge Gill by Myrninerest, edited by Sophie Dutton, which was published to accompany the exhibition devoted to Gill's work  she curated at the William Morris Gallery, London. 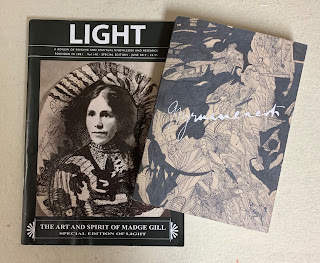 Madge Gill is an artist in whose work I have long been interested. I even own a few pieces, all courtesy of the Henry Boxer Gallery, London https://www.outsiderart.co.uk/artists/madge-gill Her range of imagery is mesmerising and the scale of her visual art pieces moves from the near-miniature, on countless postcards, to large – and sometimes enormous – drawings on calico, five of which are can be seen in the William Morris Gallery show, including the breathtaking Crucifixion of the Soul (1934). Besides drawings, Gill also produced textiles and automatic writing, and examples of both are also included in Dutton’s book and exhibition.

In ‘The Art and Spirit of Madge Gill’, Vivienne Roberts develops a fully rounded picture of Gill’s life and character. She deals intelligently with Gill’s identification as a canonical outsider art figure and outlines her relationship to the artworld, both during her lifetime and after her death, demonstrating a continuum of sorts that has hitherto been downplayed. As is perhaps befitting to the context of the publication in which her article appears (‘a review of psychic and spiritual knowledge and research’) a little more than half of the text is devoted to Gill’s relationship to Spiritualism and esoteric subjects. Although this has been noted in the past, writers have tended to suggest that this was a passing interest or not particularly structured; a result of the trauma of losing two children and a kind of creative alibi. Roberts demonstrates not only that Gill and members of her family were deeply interested in psychic studies over a number of decades, but also that she was publicly involved, both as exhibiting artist and psychic. So, besides Gill’s submissions to the East End Academy exhibitions at the Whitechapel Gallery through the 1930s and 40s, we learn about her showing artwork in Spiritualist churches and her inclusion at an exhibition held as part of the International Spiritualist Congress in Liège, Belgium in 1922. As an introduction to Madge Gill's journey Roberts' article is an excellent contribution.

Madge Gill by Myninerest is really a compendium of images and text related to the artist, including contributions by Vivienne Roberts on Spiritualism, Sara Ayad on the importance of Gill’s doctor, Helen Boyle as supporter and, in some ways, protector. It includes reproductions of the work included in the William Morris Gallery exhibition, together with documentary photographs and reproductions of letters and historical texts, including the broadsheet, Myrninerest. The Spheres, published in 1926 by Gill’s eldest son, Laurie (also reproduced full-page by Roberts). There are also four loose leaf inserts – interviews with Sir Peter Blake, Michael Morgan, and Patricia Beger, whose collection of embroideries by Gill has only recently come to public light, and a series of photographs of the artist at work from 1947 by Edward Russell Westwood. As such, the book is a rich resource that serves as both Wunderkammer and, hopefully, stepping off point for further study and exploration.

The exhibition itself, which continues at the William Morris Gallery, London E17 4PP, until 22 September 2019 https://www.wmgallery.org.uk/whats-on/exhibitions-43/madge-gill/ is well worth the visit. In some ways it is an assault on the senses. Sophie Dutton has amassed a substantial selection of important work, including the calico drawings, 18 drawings on card, a showcase containing Gill’s earliest known drawings, examples of automatic writing and postcard drawings, and 12 colour embroideries, including 10 owned by Patricia Beger (see layout diagrams and list of works at the end of this article). All of this is shoehorned into a single space. However, although given the option one might have curated the show over several rooms or in a much larger space, since Gill’s work itself is characterised by dense, shallow pictorial space and a horror vacui, there is something somehow fitting about this hang.

My morning with Madge Gill left me feeling much better informed about the person and her life. It also got me thinking that there is much more to be said about her art itself. It has left me thinking that I need to go back to the actual works (rather than reproductions) to examine their physical construction and the creative means of their production. It has also left me wanting to investigate Gill’s iconography more deeply. Now that we have much more context for the life, it is perhaps time to engage head-on with the art. 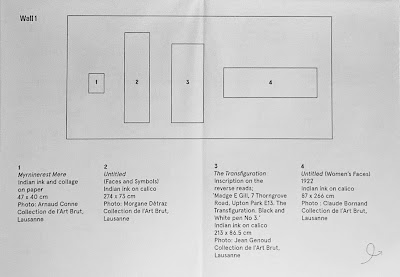 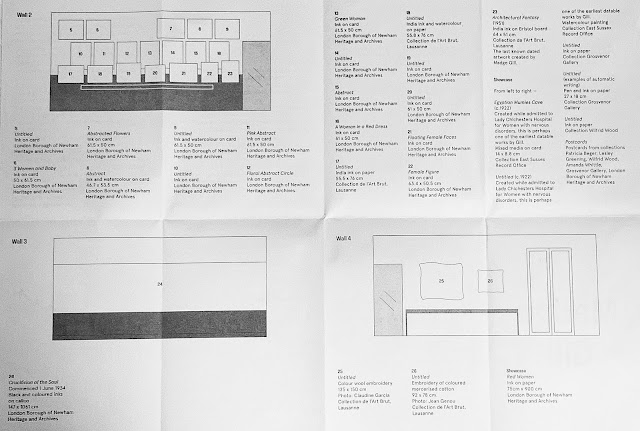 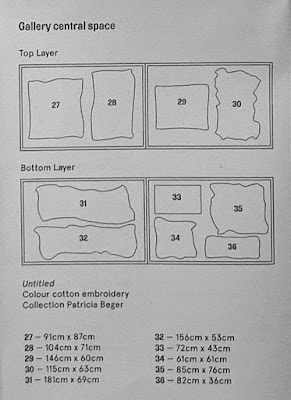 Mediumistic and Visionary Art in London


Art and Spirit: Visions of Wonder, currently showing at The College of Psychic Studies, London is a rare opportunity to see a rich selection of mediumistic and visionary art by more than a hundred artists, in surroundings devoted to esoteric pursuits.

Spiritualists and mediums produced some of the first abstract art in the last half of the nineteenth century. The College of Psychic Studies has some very fine examples in its collection, perhaps most notably work by British artist and spiritualist, Georgina Houghton (1814-1884), which prefigured modernist abstraction by three decades.

She is joined in Art and Spirit: Visions of Wonder by an excellent selection of artists for whom psychological operations provide the primary creative impulse. Works from the College’s own collection form the core of the exhibition, including other early mediumistic images by the likes of Victorien Sardou and Alice Essington. These are further enriched by loans from institutional and private collections, such as a hauntingly mysterious drawing by Madame Favre.

Flowing, serpentine line and an often densely packed and shallow picture space are common features of much of the work, including a fine selection of work by a number of anonymous twentieth-century artists. There are two really beautiful and impactful drawings by an artist known only as E. W. and on an adjacent wall are similarly arresting abstractions by Zinnia Nishikawa and Jan Steene. In the same room there is a really fine example of the work of Czech visionary, Anna Zemankova, and in another space, sublime contemporary drawings by the French artist, Margot.


Another common thread in spirit inspired art is a tendency for human faces and sometimes figures to emerge from a mass of abstract or vegetal form - a revelation of the animistic sensibility, perhaps. This is particularly effective in automatic drawings by Madge Gill, Cecilie Marková and Ethel Annie Weir, all of whom believed their images to be channelled through spirit guides.

Located at the heart of the museum district in London’s South Kensington, The College of Psychic Studies describes itself as ‘a focus for personal enquiry and a training centre for mediumship, healing and a myriad of other esoteric subjects.’ It was founded in 1884 and boasts Sir Arthur Conan Doyle as a past president. The College has transformed itself this week into a gallery and opened its doors for ten days only for this exhibition. Curated by Vivienne Roberts and Gill Matini, it presents a rich visual offering of art, documentation and artefacts related to the College’s history and mission. The exhibition proper is spread over five of the six floors of a neat, Victorian townhouse, divided into thirteen loosely themed sections that correspond to discreet rooms in the building. However, art of one type or other fills almost every available space, in corridors, stairwells and next to the elevator (there are two really beautiful woven works by Ariadne, for example, hung high on a corridor on the third floor) and there is no obvious intended viewing route. There is no catalogue as such, and with more than 500 objects included, I found myself wondering where the curated show ended before deciding to take the holistic approach, assuming that even if some of these items were permanent features on display at the College, everything here was interconnected and relevant. 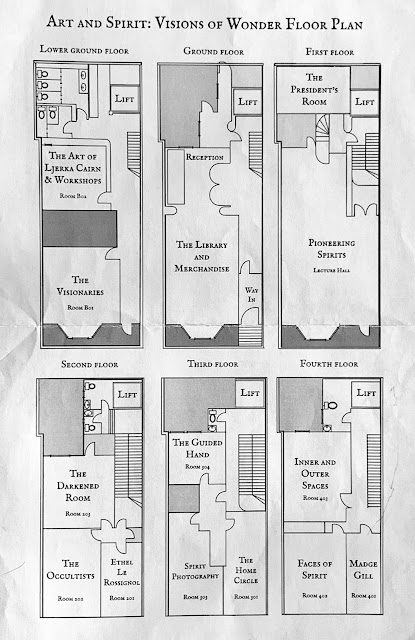 I have to declare a bias at this point. My interest is primarily in the marvellous visionary and mediumistic artworks included here. I found myself spending most of time in the sections devoted to these types of work, ‘The Home Circle’, ‘The Guided Hand’, ‘The Art and Spirit of Madge Gill’, and ‘Inner and Outer Spaces’, which, in addition to Margot's drawings, contains five standout, signature UFO pictures by Ionel Talpazan.

Other rooms housed more figurative visionary works, ranging from the Art Deco fantasies of Ethel Le Rossignol, created under the guidance of a spirit known as J.P.F., to an interesting series of naïve paintings by Ljerka Cairn, and powerful visionary drawings by Donald Pass.

The spiritualist interest in manifesting images of the departed is explored in two sections. ‘Spirit Photography’ presents a rich selection of examples of a genre originating in the early years of photography, which purported to show otherwise invisible spirit presence caught in the chemical alchemy of exposing a glass plate or film, and taking advantage of the ‘objective’ nature of photography as a recording device. After numerous accusations of fraud, spirit photography declined around the 1930s and was replaced by hand-drawn spirit portraiture, to which another section of the show is devoted. This consists of images of faces of the departed, revealed through the mediumistic hand. The remainder of the exhibition consists of portrait paintings and photographs of worthy psychics, largely in the ‘Pioneering Spirits’ section, and the paraphernalia of their vocation, distributed through several of the rooms, most notably on the second floor, in the sections ‘The Occultists’ and ‘The Darkened Room’. These give valuable context and certainly set the scene for visitors, pointing to both the history and continued vitality of the College. They are also a reminder of the psychological alibi that underpins all of the other art on show.

The exhibition is open for a tantalisingly short period (courses resume at the College on 21 August), which means that visitors will have to prioritise it. And it is well worth seeing. A tremendous amount of commendable work has been put into its realisation by the curatorial team for what is the largest exhibition in the College's history.