The exhibition, Roger Ballen’s Theatre of the Mind was held in the SCA Galleries at the University of Sydney, Australia from 16 March to 7 May, 2016. It was timed to coincide with the 20th Biennale of Sydney and was a featured exhibition in the 2016 Sydney Head On Photo Festival. It consisted of a themed exhibition of 75 photographs spanning Ballen’s career from 1999 to 2015 and a site-specific art installation. In Part 1 https://www.artschooltoartworld.com/2019/07/roger-ballens-theatre-of-mind-notes-on.html I gave an account of the genesis of the exhibition. In this section I will describe the curation and hanging process of the main galleries show. In Part 3 I will consider the artist's creation of a site specific art installation in another part of the complex.


The SCA Galleries were established in March 2014 in what had originally been the laundry of the grand nineteenth-century complex designed by James Kilbride as the Callan Park  Hospital for the insane in the Sydney suburb of Rozelle
https://en.wikipedia.org/wiki/Callan_Park_Hospital_for_the_Insane

It had been home since 1996 to Sydney College of the Arts, which is  the University of Sydney's Contemporary Art School. The galleries provide a sizeable footprint (around 600 sq m of usable floorspace), nearly 200 sq m of which consists of a breathtaking space (Gallery 2) with very high ceiling and excellent natural light. This makes it one of the very few places in Sydney where really large sculptural work can be shown to good effect. The conversion was kept intentionally minimal, in order to retain the character of the sandstone building and making it an ideal place for exhibiting Contemporary Art.

The spaces set aside for the Ballen exhibition were Galleries 2 and 3 and the Callan Park Gallery (see gallery plans below), together with a series of disused, subterranean spaces that are commonly referred to as the 'dungeons'. These are not normally accessible, though in recent years they had been hired by external groups occasionally and used for (mainly horror) film location shoots and (mostly Hallow'een) parties.


Ballen would come to Sydney from his home in Johannesburg a week before the exhibition opening in order to create the 'dungeons' installation, leaving me to hang the show in the main galleries. Any tweaks could be made on his arrival. Ballen's only stipulation for the SCA Galleries was that the exhibition panels must be painted in particular tones of grey; a lighter one for Galleries 2 and 3, and a dark one for the Callan Park Gallery.

A sketchbook drawing from October 2015 (below) shows how I was thinking about content, including an indication of the mix of large and small prints in each space. It was my intention from the start to include a large video projection in the Callan Park Gallery, and three or four very large photographs (106 sq cm), printed at SCA by Nick Greenwich, on the end wall of Gallery 2 to reduce the sense of vast space between the entrance and the end wall. These would be the anchors around which the rest of the show would grow. Other than that, it was always my intention to position pictures by eye once I had them framed and in the spaces.


The works were gathered together according to their intended 'theatre' and a process of laying them out along the floor and shuffling began (see images below). At times I was assisted by the Gallery Manager, Liam Garstang who has an excellent eye, allowing us to bounce ideas off each other about the order of works, and in particular in respect of spacing and heights for hanging.

The annotated handlist reproduced below shows the original images assigned to each 'theatre', with an indication of those images that moved from one 'theatre' to another in the course of the installation. This was always a result of how well groups of pictures fitted together visually. However, although the theme of each 'theatre' wasn't subject to hard-edge definition, I nevertheless took care to ensure that any image that was moved was in accord with the core theme. This was primarily a set of intuitive choices - the decision had to 'feel' right. 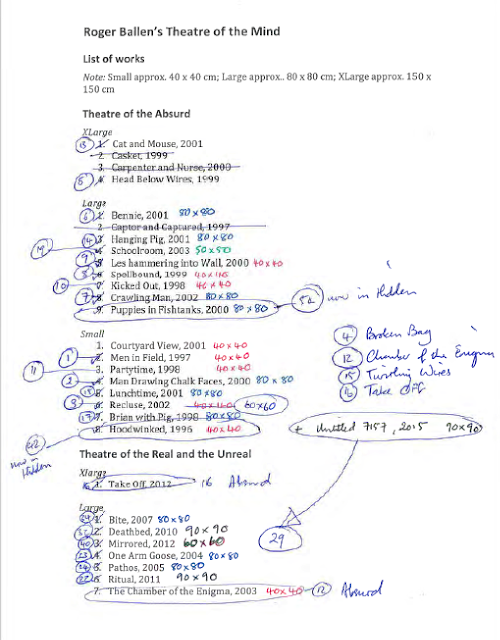 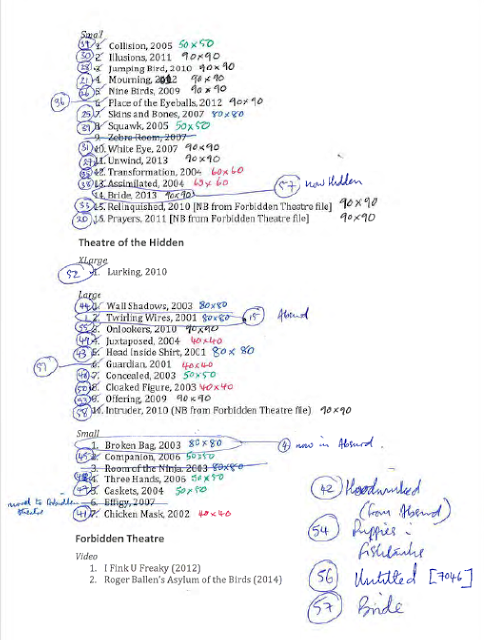 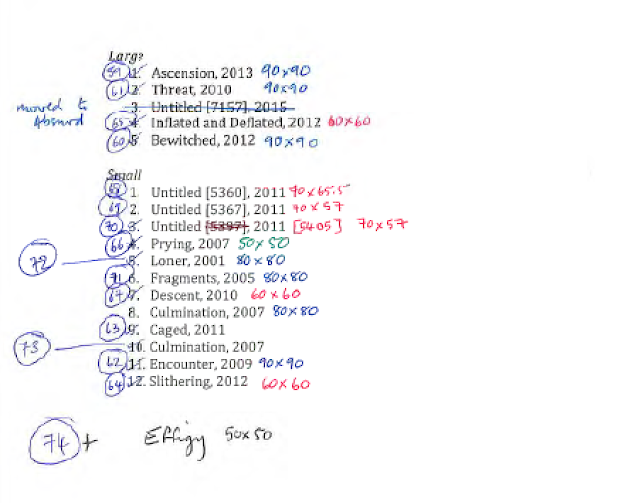 The exhibition hang was completed by Liam Garstang and his assistants over the course of two or three days. Labelling was minimal. The name of each 'theatre' was indicated by black, vinyl lettering placed high on an exhibition panel in each gallery, so as not to distract line of sight of the photographs. The works themselves were not identified by wall labels. Instead, a number was placed discreetly beneath each work, corresponding to a handlist that was available to exhibition visitors (reproduced later in this text). When he arrived in Sydney, Ballen was broadly happy with my hang, making just a couple of suggestions for changes, including moving a picture I had placed very high on a wall above an arch, which he felt made it too difficult to see the image. Below are some photographs of the final hang.

I conceived of the exhibition moving from one 'theatre' to another in the following order: Theatre of the Absurd, Theatre of the Real and Unreal, Theatre of the Hidden, Forbidden Theatre, and Theatre of Darkness. I explained the assumptions underlying the choice of each 'theatre' and its place in the order of the show in the handlist available to visitors to the exhibition (see below). Viewers were not coerced into moving through the show in a particular direction, however. Rather, I hoped that the hanging of the works and the particular character and location of each space would suggest a certain natural direction of flow. This seemed to work quite well.

Viewers entered the exhibition through a relatively small door into the huge space that is Gallery 2/Theatre of the Absurd. The three big pictures at the far end of the gallery inevitably attracted visitors to move that way sooner or later. Once there, the obvious thing was to turn right into Gallery 3, which at that end was the Theatre of the Real and Unreal. There was no hard barrier or demarcation between that and the Theatre of the Hidden, which took up the other half of the gallery, beyond an 'H'-shaped, temporary display unit. Thus, although there were two 'theatres' in Gallery 3, their edges were blurred, which I liked. By this time most viewers had not noticed the opening back in Gallery 2 that served as entrance to the Callan Park Gallery/Forbidden Theatre - partly because of a blackout curtain across the entrance and the minimal gallery signage. The entry into this very low lit space with spotlighted photographs and near lifesize video projection wall was meant to be revelatory and somewhat claustrophobic. Three films, at once compelling, disturbing and exhilarating, played on a continuous loop: Asylum of the Birds; Outland; and I Fink U Freeky (Ballen's video for South African Zef rap group, Die Antwoord).

The final space, the subterranean 'Theatre of Darkness' was in another part of the Kirkbride complex that was not part of the SCA Galleries proper. Visitors could only access this part of the exhibition by pre-booking, which created a strong sense of mystery and desire among the Sydney art-going public and a large number of much more irregular gallery goers. This will be the subject of Part 3.

Below is a reproduction of the gallery handlist used by visitors to the exhibition to orient themselves and to identify the works: 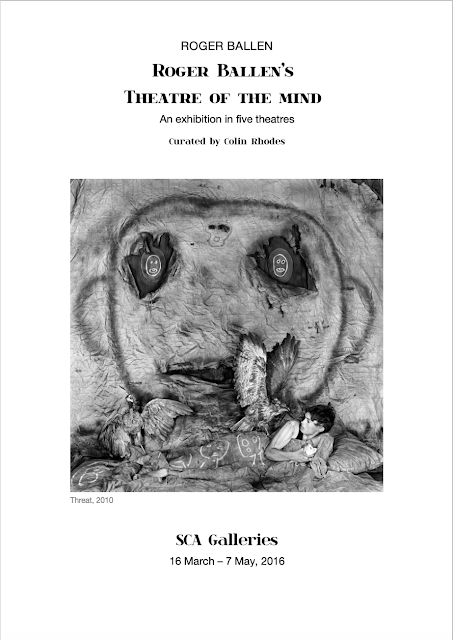 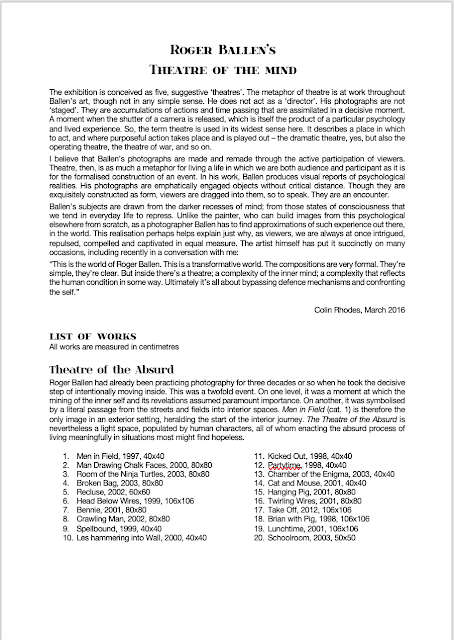 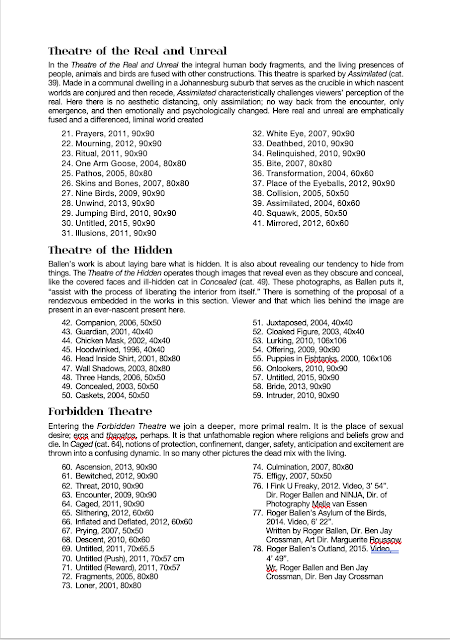 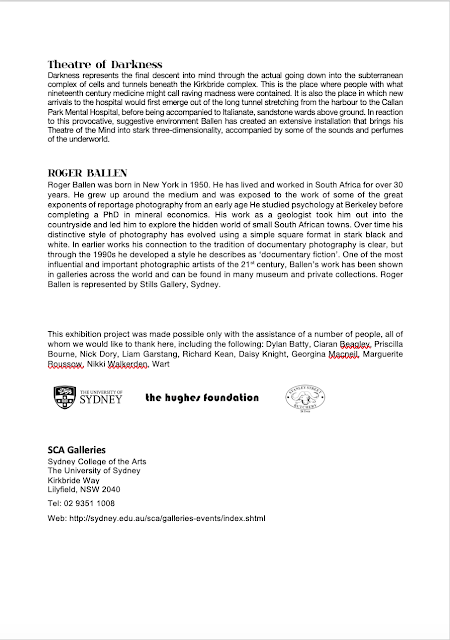