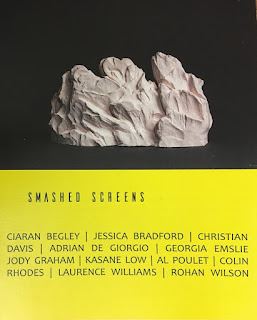 Thrilled to have been included in this group show by Priscilla Bourne. She's a fantastic artist, but resisted the temptation to curate herself into this amazing collection of diverse practices. Not sure whether it should have worked, but "Smashed Screens" turned out to be an inspired piece of what I'd call collage  - that is, it's not just works by eleven artists in one space, but works really actively in conversation with each other; the thing operates as a coherent whole, without viewers ever mistaking the different sources of each part. Like a collage, it mobilises its communicative power across boundaries.


Here is the little essay I wrote for the catalogue:


The Mechanisms of an Event by Colin Rhodes

Art confronts the limits of meaning. It operates in that hinterland between sense and anti-sense; between language and babble; between the mundane and the marvellous. It is always at once generative and defunct. Dragged forth from some other place, it relies entirely on encounters with embodied subjects other than its creator(s) to continually produce the life it pretends. The artist is never really Pygmalion, but always in a way, Frankenstein. If art is a product of unconscious desires (and more or less conscious strategies of production), those desires are invariably unfulfilled or transcended.

When I am in the middle of making art I ask myself only very simple, practical questions, and even then in a dumb, quiet kind of way. I know where things are going, though not in a way that I could explain either to myself or anyone else. There is no cartography in this zone. No GPS. This is precisely because art emerges from a sort of in-between place. Artists at work are forever hopping across the boundaries of the dialectic: now here, now there. Artists are shape-shifters. It often makes them elusive souls at times when they are called on by the world, and magnificently present at unexpected moments.

When I am confronted with other art my reaction is different to when I am inside the process of making. I am overcome with an urge to describe it. This petrified, once-molten block emitting an uncanny glow here, this geometric, constructivist frame, fashioned from mundane materials, that is a conduit for sound, there. An apparition made tangible and solid. A painting whose tangled, shallow pictorial depths are landscapes for psychological wandering. One way or another, art, for me, is always about representation. It is always situational. It is always saying something about something. Even when it is gnomic or seemingly hermetic. Even when it chatters like a person made delirious by some plague. It has something to say. I listen to it – with all my senses. I want to engage.
Sometimes an exhibition of work by different artists remains just that. Nothing is added through the act of mixing. No new job of work is done by the disparate objects sharing the space. That is not the case here. Artist and curator, Priscilla Bourne has incisively collaged together a diverse collection of works from a group of artists whose practices, on the face of it, emerge from very different wellsprings. I suspect that this is not quite the case. We have some fundamental things in common. Not least there is an engagement with the raw stuff of making and an interest in the potentialities of poor (inartistic) materials and the ready-made. Moreover, there’s a common belief in the innate capacity of inert materials to communicate sensually. We find here reanimations and repurposing of the cracked and used-up, sometimes with the artist having first taken the material/object to the brink of formlessness.

The objects in this exhibition invite viewers to engage not just with each one individually, but with the group en masse. In fact, they exist as a group, sharing the space of the gallery productively. They interrelate and suggest interrelations. With the creation of these subtle networks of communication between objects, the stage is set for the exhibition to be made and remade continually through the dialogic participation of viewers.

In keeping with the ideas of Russian theorist, Mikhail Bakhtin, I perceive each artwork in “Smashed Screens”, and therefore the exhibition as a whole, as consisting of multiple authentic voices. The authorial voice (of the artist and of the curator) is not singular, but an accumulation of the voices of the others it contains. By dint of the choice of materials, as well as any aesthetic act, the work is characterised by heteroglossia; a clash of different utterances and social levels of language. From this perspective, the work (each individual piece and the totality) has the character of an event and is made from the outside by the viewer. If we accept that the artwork metaphorically has the character of an embodied subject, has a kind of personhood imbued by the artist who creates it, then we can recognise that it is also unable to complete itself: it achieves perspective only from outside – only the other is in space, while the individual is oriented by its non-spatial inner centre – and it cannot know its own beginning and end.

“Smashed Screens” is therefore durational. But it does not rely on the temporal linearity of moving pictures produced by a camera. Rather, it reaches behind and beyond that paradigm. It has the quality of an event. And, as such, implies community, which is exemplified by the coming together in space, and continuity, which is characterised precisely by its lack of beginning and end, for it is always being made and remade in consciousness.

Email ThisBlogThis!Share to TwitterShare to FacebookShare to Pinterest
Labels: Art and Design, Exhibitions